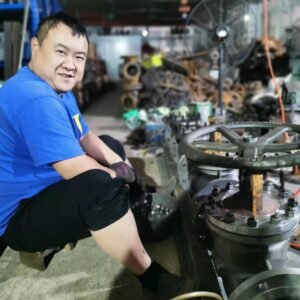 Globe valves are straight-moving valves used to regulate or stop fluid flow. There are 3 types of globe valves according to their disk or other design. The opening or closing movement makes the space between the seat ring and the disk that closes when the valve closes. This feature makes the globe valve suitable for the throttling capacity required for flow regulation.

Here are some other types according to the type of body of globe valves;

The globe valve’s essential components are the seat, stem, and disk. The globe valve disk can be pulled entirely from the flow direction or close the flow path. During the movement of the valve, the disc moves perpendicularly to the seat. Globe valves are created to regulate up and down flow within the valve, disc, and seat. The seats are similar to the plane of the flow line.

Compared to the gate valve, the leakage from the globe valve seat is less due to perpendicular contact between the seat ring and disc. This space helps seal the disk and seat.

The first type is a composition disk used to perform a helpful cutoff. A non-metallic hard insert ring is used in designing composite disks. The sent type is a needle-type disk that offers suitable throttling compared to composition or ball disk design. Due to its wide variety, tapered and long plug disks are available to regulate flow conditions.

The ball disk design is used in low-temperature and low-pressure systems. It is helpful for throttling flow and is also used to stop and start the flow.

The Y-type design is more suitable for the high-pressure drop problem in other valves. The stem and seat are angled at about 45° to the pipe axis in this type. These body valves are used in high pressure and other services where pressure drop is issued or problem.

The most common and simplest design type is a Z-body. The Z-shaped separation in the globular body consists of a seat. The linear structure of the seat seating provides the disk and stem to cross vertically to the axis resulting in a very high-pressure loss.

The valve’s seat is readily available by the bonnet, which is connected to a large opening on the valve’s body. The stem moves through the bonnet as a gate valve. This z-design has great installation, manufacturing, and repair. This kind of valve is used where throttling is required and have pressure concern.

As described above, a globe valve has three types according to body design Tee (T), Wye (Y), and Z. But this is not the only way of dividing the globe valves. Here are sometypes of Globe Valves depending on the Body Bonnet Connection. These types are explained below are available:

This type is common where no disassembly is needed and is lighter in weight.

Most popular and widely used valve type is bolted bonnet. It requires a gasket for the bonnet joint and body sealing.

The inexpensive or simple design valves are screwed.

This valve of globe valve is used for high-pressure applications.

This valve can act as both a pipe elbow and a valve. Because it’s inward and outward ports are at 90 degrees, this type of globe valve lowers head loss. The primary use helps control flow, so they are suitable for automation. With manual working, turning the handwheel on the valve move on the valve stem. But you can change the handwheel with an automated system using an electric actuator.

Selection of the best actuator depends on how you have compressed electrical power or air available to the actuator. The angle globe valves have a simplified round took to make flow regulation. They are used to handle the slugging effect of this kind of flow. To prevent assembly of the medium, heating steam jackets can be added to the valve design.

How does an angle globe valve work?

The opening and closing sections of angle globe valves are plug-shaped. The sealing surface of the angle valve is smooth or conical, and the flap travels linearly down the fluid’s centerline. An angle globe valve’s inward and outward channels are also referred to as an angle valve. This form of globe valve provides the path for flowing, resulting in a stress drop.

What is a DC globe valve?

The stem of the DC-type globe valve makes a certain angle, and the sealing surface of the valve seat also has an angle. The valve body can be made from basic separation. For easy maintenance, the separate valve body uses to sandwich the valve seat in the middle.

This type of stop valve helps the flow of fluid change direction and reduces the flow resistance. The valve disc can be welded with hard alloy to make the complete valve more resistant to corrosion. Corrosion resistance is very suitable for pipeline control in the alumina process. In the Y-shaped or DC globe valve, the flow of the valve body form a diagonal line. So that the damage to the flow is lesser than that of the traditional globe valve. The pressure loss of the DC valve is also often slight.

The plunger valve comprises a valve stem, valve body, plunger, valve cover, sealing ring, handwheel, etc. When the wheel moves, the valve opens and closes by pushing the plunger up and down in the middle of the whole rack by the valve stem.

The connection fit between the sealing rings is assumed in the valve. By altering the flange bolt in the pressure cap, the force produced by the contraction of the sealing ring is sealed.

So that the valve can fastly be opened and closed, the plunger valve has long service life and a work-saving process. But the controlling stroke is longer than the globe valve, so throttling control is harder.

This form of globe valve is a variety of traditional globe valves. The seat and disc are often created in this valve on the plunger principle. The plunger is connected to the valve stem by two elastic sealing rings on the plunger. A compress around the plunger separates the two seals by the load applied to the bonnet. These seals are changeable and can be made of different materials.

The sealing ring gets a new non-toxic sealing material, so the sealing is more durable.

Due to its sealing materials, the plunger can be split into metal and non-metal sealing plunger valves.

The sealing surface of the metal plunger valve includes the polishing, the plunger after precision grinding, and the hard seat surface.

The pair of non-metallic sealed plunger valves includes lower and upper two soft plungers and sealing rings. After polishing, precision, and grinding, the plunger is linked to the valve stem.

We have discussed many types of globe valve depending upon stem or disc. All of these have specific functions.

There are following some of the specific applications of Globe valves:

Hi, I’m Dara Yang. In our company, I am responsible for the sales department. 10 years for sale bellow seal globe valve make us more profession on Service. Any questions about products and our company, you can contact us.

Ask For a Quick Quote

We will contact you within 1 working day, please pay attention to the email with the suffix “afvalve@chinavalvesmfg.com”.